Bee Aware! is now for sale on Steam!

New gameplay video has been uploaded!

I've been polishing Bee Aware! for the last two months, and am rounding up the last bits. A new demo has been uploaded, together with new screenshots (new video's will follow soon). Bee vs Mites (a topdown scroller) has been upgraded, and now includes realistic, thick smoke effects, water and leaves effects, a smoother gameloop and a boss level. Bee vs Mites is playable from the demo, as is Bee Puzzled (jigsaw game). More updates: - The playable bee now has animated wings. - Improved interface for the quizzes (Bee Smart - 5 quizzes, 20 questions each). - A set of 18 new card foregrounds and 75 new images (total 150) for the memory game (Bee Remembered). - New (small) end animation for Bee Remembered. - Added a ghost to Bee Amazed (maze game). If it catches you, you're forced to solve an equation (the ghost used to be a teacher). - New (small) end animation for Bee Puzzled. - Added 20 images to the jigsaw game, which makes a total of 50 images. - Made 4 themes for Bee't the Bear (puzzle game), summer, autumn, winter and a desert theme. - Added three difficulty levels to Bee Fast (arcade game). - Implemented a day/night cycle in Bee Fast (I love it when the lights of the tractor and plane are activated). - Added a lot of nonsensical text to BB, a bee that talks too much , whichs brings me to a total of 211 silly texts. - Improved overall gameplay, cleaned up unnecessary code, improved graphics where needed etc. etc. - Added extra achievements for Steam (beat the boss, solve an equation etc.).

I need a break.

Just over a month ago I was convinced I was more or less done. Well, after taking another good look at my game, new and better ideas popped up... so, now I've updated/polished a few of the games (added extra backgrounds, made new and more realistic effects, gave Beeatrice (the bee that does all the hard work) animated wings, improved gameloops, saved memory usage, gave Bee't the Bear a new look etc.), and am currently working on one final addition, a boss for Bee vs Mites (MegaMite!). And then… I'm done… really (yeah right). When MegaMite is done, I will upload a new demo.

Uploaded the first build for testing to Steam, and all seems to be working well, including the achievements. What remains is writing two more quizzes, some little tweaks and some testing, and then I'm ready to publish to Steam!

All coding is done! All graphics are done! Yippee!

Finished the first two quizzes this week, both about bees, and I'm quite satisfied with the contents. Writing code is much easier than writing coherent quizzes though! Anyway, three more to go, Mother Earth, The Universe and Bee Aware! (the latter will be a silly quiz about the game).

Due to some technical changes I had to change (enlarge) the save file. If and when you decide to buy the full version on Steam, and you installed the demo (v 0.99) on or prior to march 20, 2018, you might experience issues with your save file. If so, you can contact me at info@dannyvanderkolk.nl and I will fix it for you. You can also choose to delete the save file and restart the updated demo (v 0.99.01, which you will have to download again): [drive letter]:\Users[your username]\AppData\Local\Bee Aware\BeeAware.sav If you only have v 0.99.01, you won't have to do anything. My sincere apologies for any inconvenience, Danny.

I updated the trailer, it's now combined with gameplay impressions!

Hi there, Two years ago I started learning Java. My idea was to return to the world of ICT (I used to work as a programmer, back in the early days of the internet, and was self-employed for a few years, developing software and websites), but I soon ditched the course I was following (boring, and way too theoretical) and started developing a game (Bee Aware!). My idea was to create a diverse, fun and slightly educational game for all ages about bees and the fact that they are endangered (which in turn will have serious consequences for humanity). Anyway, I started with Java Swing, but felt limited after working with that for a few weeks, so I switched to JavaFX and had to rewrite what I had done so far. Now, Java may not be the first choice of many when it comes to game developing, however, I've grown to love JavaFX and can tell you it's excellent for 2D game development. To make a long story short, after many nights of figuring out JavaFX, and after many sighs from my wife and kids, Bee Aware! is now finished, and the demo is available. The past week I was busy creating the achievements (67 of them) for the Steam platform, and putting together a demo for various indie sites. For the Steam build I only still need to implement cloud saving, and some stuff on the store page needs to be updated, and then the build and store will be complete (Steam doesn't make it easy though, there's a jungle of documents and api commands out there, and their interface is somewhat chaotic, but I'll get there). I then still have to write part of the quizzes, but I'll save that for when all the technical stuff is done. Within a month or so I hope to publish Bee Aware! on Steam. Greetings from the Netherlands, Danny. 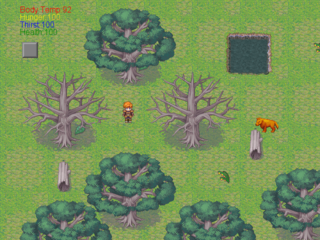