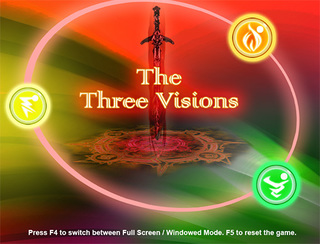 The Three Visions FULL v1.05 is released~ Full v1.05 Changelogs : + Grammar! Of course.^^ + Move some enemies' position, so they won't disturb your movement in a higher terrain. (I can't describe it well, you'll know once you played the game) + Improve some dialogues + Add SP numbers on battle HUD + Magic Call fixes (Some skills trigger a game crash) + Glitch and minor bug fixes Let me know if you find any bug/glitch, I'll update the game in a day. Have fun.

The game has finished. :) The Three Visions FULL v1.04 is released~ +++ *I renamed the game title since there's a manga called 3x3 out there. +++ Feature Updates +++ +Easy Leveling, Intense Battle+ You can build your skills & attributes without level-grinding. It's pretty easy to reach the maximum level for each character. Your victory throughout the battles will be determined by strategy, runes and how fast your reaction and determination.

+Fast paced Story with plot twist+ 5~10 Hours Gameplay. You'll have a crucial decision making and moral dilemma response that will affect the gameplay and the ending you'll get at the end of the game. Also there's a peripeteia when you reach a certain point in the game.

Known issues : the game was error in zip files. so I decided to add external link, you can't play it online here. Sorry. Little Kingdom
andreilGame
Cookies help us deliver our services. By using our services, you agree to our use of cookies. Show More